*All hours are subject to change per show schedule and/or holidays.

BOHEMIAN QUEEN: A TRIBUTE TO QUEEN 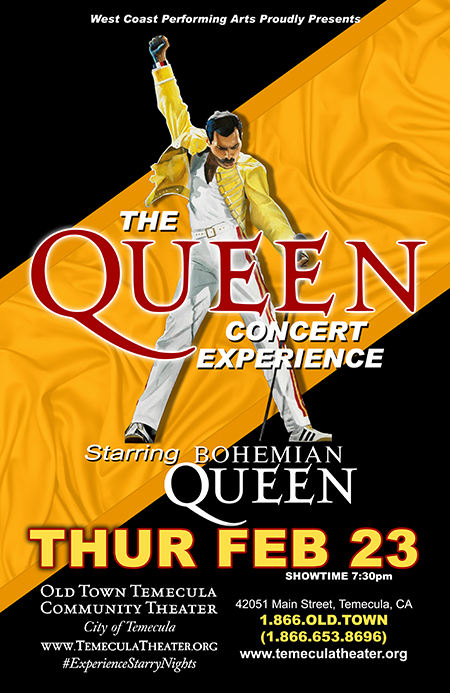 The ultimate Queen show celebrates Freddie Mercury's Queen in Concert from the 1970's! LA's hottest new Queen group 'Bohemian Queen' has been selling out shows everywhere since they hit the ground running less than a year ago. Made up of veteran members of the Los Angeles musician community, these session and stage musicians are the best the West Coast has to offer.

Bohemian Queen comprises Los Angeles's finest players and voices, coming together to bring to life a classic catalog of songs and melodies and to deliver the same level of detailed showmanship that has dazzled arenas and stadiums. Five top-tier music industry professionals with coast-to-coast resumes on a mission to be the world's best and most passionate tribute to Queen.

Vocalist Paulie Z channels the soaring vocal power of Freddie Mercury, commanding the stage. Hailing from Brooklyn, NY, he led his own band ZO2 through a tour with rock heavyweights KISS and Poison, a band which was also chronicled in the IFC comedy series “Z Rock.” Upon moving to Los Angeles, Paulie was also recruited to sing another legendary catalog with UK glam rockers Sweet.

Joined by guitarist Steve Zukowsky, Drummer Glenn Jost, Keyboardist Victor Bender and bassist Aaron Samson, Paulie Z's Freddie Mercury completes the full cast of this acclaimed theatrical presentation celebrating the music of one of the most iconic rock groups of our time.

You'll hear all of Queen's Greatest Hits! We Are The Champions - Tie Your Mother Down - Bohemian Rhapsody - We Will Rock You - Another One Bites The Dust - Killer Queen - Crazy Little Thing Called Love and many more, plus some wonderful surprises you won't want to miss. Don't miss the ultimate Queen Concert Experience starring Bohemian Queen. It's a family-friendly show suitable for all ages!

Check out the promotion video.